I’m back from Paris and feeling very upbeat. 🙂

Much as I was nervous about starting at Fotolia and being shipped off to Paris it was an entirely positive experience: the people were lovely, the company was exciting and forward-looking, and what I saw of Paris was just beautiful.

I met my new boss, Benoit, and new colleague, Dinah, on Tuesday morning at St Pancras and we caught the 7.55 AM Eurostar.  The Eurostar was cool, but so efficient it was something of an anti-climax – one minute you’re in London, the next you’re in Paris: no fuss, no heavy-handed security, no waiting around.  If only all international travel could be like that.

The Fotolia offices are in the centre of Paris and we spent a lot of time there, meeting people, being shown how the Fotolia systems work and learning how the company operates.  Nothing particularly complicated; in fact we could probably have done it via Skype from the UK.  But then we wouldn’t have met our friendly new colleagues and gotten to laugh and joke with them (in English – my French doesn’t extend much past Bonjour and Merci). 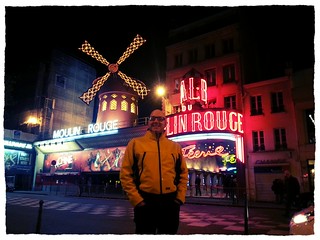 We ate out every night (on expenses!) and I discovered the French have every reason to be proud of their cuisine – even their hamburgers were remarkable!  Wednesday, Ben took us out to see Montmartre, Sacré-Cœur, the Amelie cafe and the Moulin Rouge, which despite being a whirlwind tour was great fun.  Thursday night we went to the pub with most of the IT team, all of whom spoke excellent English and made us feel very welcome indeed.

What can I say?  We had a really great week in Paris – and Dinah, who’s in charge of social media, is a very nice lady, too (which is just as well, as we’re going to be sharing quite a small office together in London!)

The icing on the cake was that there was a lot of positive feedback regarding what I wrote during our stay, and that’s so important when you’re a writer/copywriter.  Because there are no right or wrong answers (you can’t pull out a spreadsheet and show someone the equations) what people think of your writing, whether they like it or not, is extremely significant.  And as much as writers have to be flexible in what we produce, there is a sort of core style that it’s easier and more natural to write in.  Fotolia seem to like my “core” style. 🙂

So, I’ve come back feeling jolly optimistic for the future; hell, I’m even looking forward to getting back to work on Monday!

The only downer was, I missed my family while away.  Paris was very nice, but it’s always nicer to get back home again. 🙂