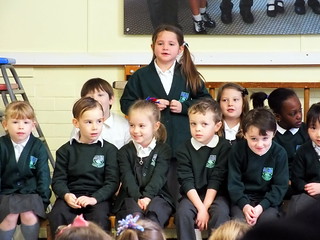 When the teacher asked who wanted a speaking part in their class assembly I can only imagine Amber sticking both arms straight up in the air, climbing on a stool balanced on top of a ladder shouting “MEEEEEEE!  MEEE!  MEEEE!”

Amber isn’t shy, isn’t quiet, and loves being at the centre of attention  (contrast this with Millie, who asked not to have a speaking part in the Christmas Play).

Well, today was the day of the assembly, and the girl done good.  She briefly forgot one small part of her lines, but was great with all the rest (especially when you remember she’s only six) speaking clearly and loudly enough to be heard, but not shouting.

The enunciation could have been a little more conversational, I thought, but that’s just me being picky. Well done, little Doob!

I’ve saved her stage debut for posterity on YouTube.