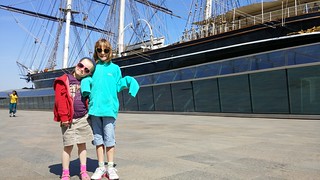 It still being the Easter Holidays (still!) the girls and I visited the Cutty Sark in Greenwich on Wednesday.

I’ve been to Greenwich often enough and seen most of the cool stuff there (museums, foot tunnel under the Thames, the market, the park, the Royal Observatory, etc.) but never the Cutty Sark.

Sadly we missed our intended train because we were all playing Titanfall and got a bit carried away, but we still arrived just in time for lunch.  And lunch, of course, was at the girls’ favourite London restaurant (because it’s one of the few they know) San Miguel on Greenwich Church Street.  They’d been there with the Lovely Melanie just 48 hours earlier, when they came to see the brilliant Signor Baffo at the theatre in Greenwich; but despite the amazing choice of restaurants in Greenwich decided that San Miguel was the only possible choice.

The waiter even recognised them!  They are officially “regulars”! 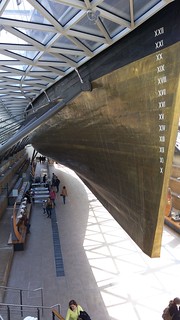 After lunch (I recommend the calamari), we joined the Cutty Sark queue inside the entrance – not realising the queue began outside and you had to queue outside to join the queue inside!

As an Englishman with a genetic-level respect for queuing and proper queue etiquette, I was mortified when this was pointed out to me, and hung my head in shame in the outside queue. 😦

Despite this embarrassing social gaffe, the Cutty Sark was really rather good.  It’s not a terribly old ship (nothing like as old as, say, HMS Victory or the Mary Rose) but looks very impressive – an immense shape simply floating in the air above you, and is fascinating to explore, too.  It’s all very well done for adults and children. 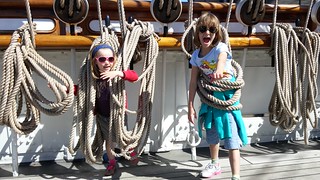 I can count the number of times I’ve actually told my children to “shut up” on the fingers of one hand, but this added another finger to the count. 😦

We got home, exhausted, but just in time for tea and had hot cross buns for tea.  Yum.

And Millie, inspired by the Cutty Sark and the ship in a bottle from the gift shop, has been inspired to write a story on her blog called The Ship In A Bottle.