As a man who grew up in a house full of boys I’m not the best judge of how “girly” my two daughters are.

On the one hand my eldest, Millie (8) loves cuddly toys so much that we’ve had to ration them; while her sister, Amber (6) has a similar make-up fixation that has led to us actually hiding most of the cosmetics in the house.  They both enjoy dressing up and watching Barbie cartoons (most of which aren’t very good, although, Barbie: Life In The Dreamhouse has a knowing satirical edge that makes it surprisingly watchable even for male grownups). 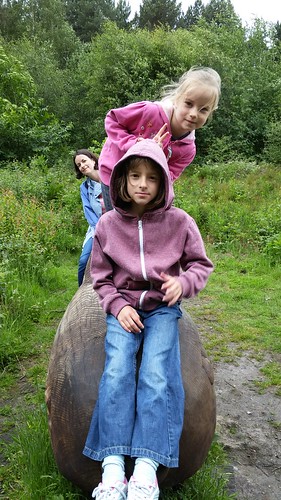 I’ve done my best not to judge their predilections, while at the same time trying to introduce the idea that there’s no real differences between what girls like and what boys like.  As a result, Millie likes Star Wars and Doctor Who, they both enjoy playing video games such as Lego Marvel Superheroes, and their favourite colours are no longer pink (sadly, I’m slowly losing the battle against One Direction on the music front, but they do at least hear different genres and styles of music when at home).

But what’s most reassuring are the times when we’re out and about seeing a bit of Nature.

Yesterday we went to Joydens Wood again for the day, just wandering about, exploring, and playing.  The girls ran off through the trees throwing pine cones at each other and making up their own crazy games; they both found sticks that looked like swords and were battling against witches and, er, more witches.

Basically, they weren’t “girly” at all, which was, as I say, reassuring, because it shows that they can be physical and “boyish” when given the opportunity.  They were poking at ants’ nests, screaming with delight on swings, swiping at nettles with their swords, pretending to be knights, all without a thought for getting grubby or falling over.

And I nodded my head as I watched, thinking, “Yeah, we’re not doing too bad as parents.” 🙂