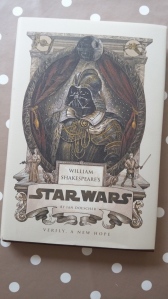 It might seem like a bit of a silly novelty, but it’s extremely well done – the Star Wars (Episode IV) story told in Shakespearean style.

Ian Doescher, the writer, has had something of a genius idea for helping people understand Shakespeare, as I realised when Millie got home from school yesterday.

It was just Millie and I at home (Amber had gone to her friend, Izzy’s, for tea). So, knowing her love for Star Wars, I showed her the book and suggested we “perform” some of it.

I thought she’d soon get bored and maybe not be able to follow the language, but because she already knew the story well the language wasn’t really a problem. Sure, I had to help with some of the archaic words and explain what a “Chorus” was, but we stood in the kitchen and “performed” for a good 20 minutes.

Millie did a very good R2D2 and Rebel Captain, and I did my best switching between C3P0 and Darth Vader, and both of us laughed, which was lovely.

And I hope we can do it again when we have some free time. I think it’s a fantastic way to introduce Millie to Shakespeare. If she can become familiar with the way he writes by following a great story she already knows well, it’s a relatively small step to understand and enjoy his other works.

I wish we’d had this when I was younger!