Friday’s award was a bigger deal than expected. I honestly thought it would be – at most! – 50 people and my name being read out alongside lots of others.

I was glad to I had a shave that morning and looked at least vaguely respectable because it was actually closer to 300 people in the fantastic new(-ish) City Hall building, where Millie, Amber and I had reserved seats right at the very front and were made to feel very welcome by all the lovely people from BLISS.

There fascinating speeches from people who’d done far more than I ever could for BLISS, and whose experiences were far more traumatic. Millie was born at 26 weeks but there were children and grown-ups born at an astonishing 23 weeks – the absolute outer limit of survivability for premature babies!

Professional photographers were snapping pictures the whole time and the whole thing was jolly well organised. Or, at least, it seemed to be – I’ve never been to a proper awards ceremony before (unless you count being backstage at the BRITS in the 1990s!)

When the chief executive of BLISS read out my name and contribution I had planned to take Millie up onstage with me, but Millie lost her nerve at the last second and I went up alone. My speech was very short and not particularly inspired – I didn’t write anything down, reasoning that a speech “no more than two minutes maximum” would be hard to forget. 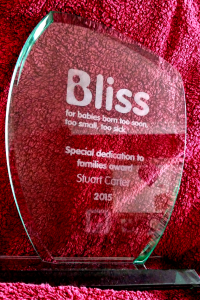 Of course, once onstage everything clever I thought of saying vanished from my head like water down a plughole and I simply said something about Millie being the reason I was there and what a surprising honour receiving this award had been. I shook hands with the chief exec, took my unexpectedly large glass award and certificate, smiled for the cameras and ran back to my seat!

Amber was given the big family camera to film and take pictures of everything, not least so the Lovely Melanie could see it later. She got some great pictures of City Hall, of the speakers, of the stage, the audience, the other award recipients, the ceiling, the floor, the posters, the view out the window – everything, in fact, except me.

There’s not one single photograph or video of me.

I got rather cross about this when I later found out. Bad photos, blurred photos, wonky photos, fingers over the lens, all of this would be understandable; but not one single solitary photograph of me at all? 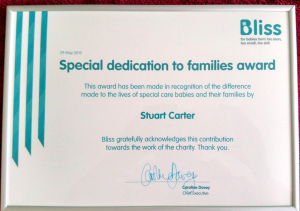 Afterwards there was a reception at the top of City Hall, which offers some of the best views of London outside of the Millennium Wheel or the Shard. There was also free food, drink and face painting. But by far the most interesting part was getting to speak to other helpline volunteers, like myself, medical professionals and some of the BLISS staff.

I have very little actual contact with BLISS these days, mostly it’s logistical stuff about the helpline, to be honest. Getting to chat with other volunteers was very interesting, because I find working on the helpline quite nerve-wracking – picking up the phone not having a clue who the person on the other end might be, but having a duty to help them to the best of your ability, which is based on experiences from almost a decade ago now.

Another interesting fact was that I’m the only man who works on the helpline, which was a proper surprise. I didn’t think my work on the helpline was particularly award-worthy, but it’s obviously more unusual than I realised.

It was nice to meet so many people grateful for that help, too; in fact, with hindsight, that means more to me than the award – just meeting so many people who said “thank you”.

When working on the helpline it doesn’t feel like a big deal – I’m usually sat at home just watching TV with my mobile next to me – but it is a big deal for everyone who calls. Talking afterwards made me realise that all over again.

And one mum, who had been thinking of joining the ranks of BLISS helpline volunteers, decided to take the plunge and do it after we spoke for a few minutes. That alone made the whole day worthwhile. 🙂

Thank you to Millie and Amber, too, who were exceptionally well-behaved throughout the entire afternoon. It wasn’t always the most interesting day out for them (Amber had a massive benny before we left, shouting about how she didn’t want to go), but they were polite, friendly, quiet (when quiet was expected) and didn’t argue once.

When we left they both gave Angie, the lovely lady from BLISS who looked after us, a big hug, which left me smiling all the way home (until I discovered the lack of pictures on the camera…)