This review of Altered Carbon by Richard Morgan was written in 2001 for the website Infinity Plus. 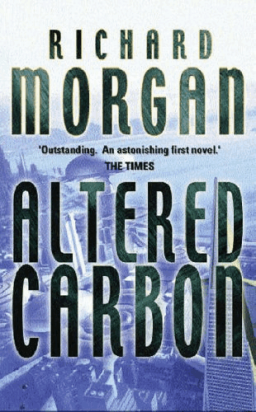 I predict Altered Carbon will be hoovering up rewards this year like a coke addict on holiday in Columbia. This is a first novel so exciting, so addictive and so bone-crunchingly in your face that it beggars the need for such virtual reality as it occasionally employs.

Takeshi Kovacs is a former member of the Envoy Corps, peacemakers (in that they will make you be peaceful) of the UN Protectorate, the decidedly tyrannical ruling body of Earth and all the rest of her interstellar colonies.

The Envoys kick ass. Everybody is scared of them, even the Protectorate itself, and they should know. So having, ahem, left the Envoys, Kovacs is basically the 26th century equivalent of a private dick, and Altered Carbon is more than a little reminiscent of hardboiled noir. Everything, from Kovacs’s ambiguous relationship with the police to his visits to the home of his rich client, screams ‘Raymond Chandler!‘ at you right from the start.

This is a good thing.

Kovacs’s stored mind has been transmitted light years from his home world, following his traumatic death, back to Earth. There, sleeved in a new body, he’s at the whim of a very rich man who lost his last 24 hours of memories before he killed himself last week, and wants to know why.

Unfortunately, the immortal and immoral super-rich detest Kovacs’ intrusion into their extended lives, the police hate his employer’s evasive lawyers, the underworld hates everyone and the rest of the planet simply have their own problems.

Altered Carbon is remarkably violent; I have no idea what the final body count might be, but I know that it’s high. However, the violence, even the worst of it, works within the novel, alternately raising the hackles and gladdening the heart as you read, and illustrating the cheapness of life in a milieu where almost everybody backs up their consciousness and those who can afford it are ‘sleeved’ in a new body upon death (or merely boredom, if you’re rich).

There are big guns, hard drugs AIs based on Jimi Hendrix, Martians and some of the sexiest, nastiest technology since Neuromancer, all set against a galactic background of paranoia and fear.

This is what Alastair Reynolds’ Chasm City should have been but fell short of – a ceaseless, permanently off-balance sprint through an all-too-grimly-familiar future where miraculous technologies are degraded through everyday use and abuse.

There are occasional throwaway mentions of background details here that beg entire novels on their own; ubiquitous pieces of history dismissed in single lines that had my nose twitching, scenting something far bigger lurking, hidden under the surface. If Richard Morgan can use these to even come close to repeating the harsh triumph of Altered Carbon in his next novel then I would suggest we have another bona fide UK sf triumph on our hands.

Go and get yourself a copy of Altered Carbon now, if only to forestall other people telling you how much you need to read this book.