Book review of Bad Timing and Other Stories by Molly Brown

This review of Bad Timing and Other Stories by Molly Brown was written in 2001 for the website Infinity Plus. 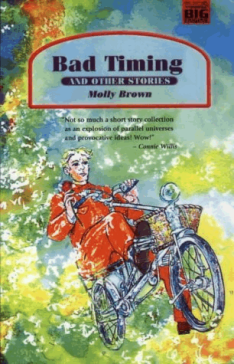 Being a collection of 21 of Molly Brown’s short stories from the past 10 years published by the new independent Big Engine imprint.

There are a number of themes treated herein: Molly loves stories about time travel and its attendant paradoxes but also, and not unconnectedly I think, unsettling tales about the nature of reality. Neither are anything new under the sun but these are well told and quite sufficiently confusing in the former case, and thought provoking in the latter.

The eponymous Bad Timing (optioned by Hollywood, I’m told) is a bumbling, cute and messed-up Mills & Boon novel that might have been written by a bloke (in the generic sense of ‘a bloke’). I can well imagine it as a film; Hugh Grant will have to be in it.

Women on the Edge of a Cataclysm wouldn’t be made into a Hollywood film though because it reads like a pop version of Joanna Russ’s feminist sf standard The Female Man, (and, suspiciously, the heroines in this version are all called Joanna) but with a lot of the heavier political baggage trimmed and replaced with some biting humour. I enjoyed it.

Other hits include The Psychomantium, which the title alone would swing, but the story itself is a worrying piece of horror; Choosing the Incubus, a sly modern take on The Exorcist and ideas of women-as-victims; and Asleep at the Wheel, whose ending caught me napping!

Learning to Fly is a lightweight but well presented piece that would fit well in many a ‘Philosophy 101’ course, and Feeding Julie managed to completely ruin my everyday bus journey into work too, with its background details of grinding urban decay and misery.

Misses? Well, the short Fantasy pieces interspersed throughout did nothing for this reviewer – simply turning the tropes of fantasy on their head hasn’t been anything new for quite some time now. But Rules of Engagement, Waiting for the Princess and Ruella in Love were at least mostly quite short.

Molly Brown isn’t the very best writer you’ll ever read (if she is then you’re reading the wrong books!), but she’s funny, has some crazy ideas and doesn’t take herself too seriously.

Bad Timing won’t be everybody’s cup of tea – the humour in many of the stories made me groan rather than laugh (groan with a wry smile, but still groan), but there’s a wide enough variation in both form and content here that everyone will surely find something to enjoy.