This review of Project Orion by George Dyson was written in 2002 for the website Infinity Plus. 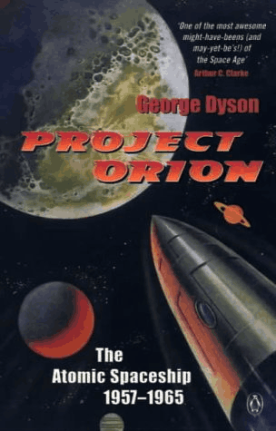 Project Orion is based upon an intriguing but simple premise: following the success of the Manhattan Project in 1945 a whole host of brilliant young physicists and engineers are at something of a loose end. Some of them, carried away at the time with their work, are now also rather concerned about the end uses of their invention and want to find a more constructive peacetime use for megaton-level fission bombs.

Two of them wonder, idly at first but with increasing excitement, whether you couldn’t use an atom bomb, or, heck, a whole bunch of ’em, to launch and propel an interplanetary spaceship.

Initial back-of-an-envelope calculations look promising and before long the host of brilliant young physicists and engineers are employed by a new company called General Atomic with a bundle of US government money to research “Project Orion”.

As the research team grows so Project Orion begins to look better and better, such that perfectly serious plans are drawn up for a mission to Mars by 1965 and Saturn by 1970 in spacecraft the size of ocean liners.

Now comes the incredible plot twist: everything in this book actually happened.

The US Air Force, General Atomic and Nasa all funded research into this unbelievable but apparently do-able idea for eight years from 1957 to 1965. Tragically, as we already know, the only fictional part turns out to be the execution of any of the projected missions. The idea of detonating atom bombs beneath a 4,000 tonne spaceship to put it into orbit or send it to Saturn may seem rather, ahem, counter-intuitive, but Project Orion had some of the finest minds of its time looking into the problems and they solved many if not quite all of them.

But Orion barely left the drawing board, let alone the ground, thanks to a combination of factors that Dyson’s book covers as well as official secrecy will allow, even 40-odd years on.

It’s Nasa that comes across as the villain in Project Orion, the lumbering government agency that can’t see beyond its own nose. This is almost certainly a little unfair but perhaps inevitable given that agency’s limited budget and the demands made upon it by those in charge of those same purse strings. Parts of this book almost made me want to weep as to where the space programme could have been by now but for lack of vision and political wrangling.

Dyson’s writing is generally clear throughout, although he tends to leap up and down his timeline a little too boisterously, such that cause and effect would sometimes get confused in my mind. Also, there is a fair bit of technical exposition here, some of it dense enough to occasionally start me off daydreaming about doughnuts before finding myself two pages further on with no recollection of how I got there.

In a book of this sort however some technical evidence of Orion’s feasibility is obviously necessary to back up all the big talk about sending ocean liners to Saturn and so forth and Dyson has obviously included it to illustrate not only the number of factors that had to be covered by the Orion team but also their enthusiasm for the task at hand.

These guys were not messing around with this!

I recommend reading Project Orion as an antidote to the litany of disappointments modern so-called space travel offers. This is a hymn to a time when we just were going into space, all of us, no questions asked.

It might be easy now to chuckle at the naivete of some of the Orioneers, as they sometimes called themselves, but any enthusiast for manned spaceflight should recognise their (perhaps younger) self in here.