This review of Forty Signs Of Rain by Kim Stanley Robinson was written in 2004 for the British Science Fiction Association‘s magazine, Vector. 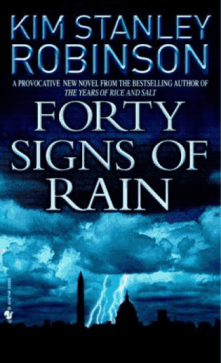 Thus I was struck by the fact that Kim Stanley Robinson’s new novel, Forty Signs Of Rain, is mostly about people going about their daily lives: if you asked them, ‘What have you been up to lately?’ I suspect they’d dismiss the question with an ‘Oh, not much really’. And yet Robinson has managed to concoct a fascinating and very beautiful short novel (short for him, that is) almost solely about ‘not much’.

There are a few tiny bits and pieces of science fiction hidden deep, deep down in Forty Signs Of Rain, but mostly this is a quiet book, a gentle admonition laced with a humour, warmth and humanity that most mainstream writers would give their right arm to have written, let alone most science fiction writers.

So what does happen? Charlie Quibler is a househusband with two young sons (Nick and Joe), but he juggles his role in the home with one in the government as an environmental policy advisor to the US Senate. His wife, Anna, is the highly respected director of bioinformatics at the National Science Foundation. Her colleague, Frank Vanderwal, is the textbook ideal of a scientist, on loan to the NSF but increasingly cynical of its role as his sabbatical year there comes to an end.

Frank and Anna’s newest neighbours in the building the NSF occupies are a group of monks, ambassadors from the slowly drowning island nation of Khembalung, there to lobby the Senate to take action – any action – on climate change. Leo Mulhouse vaguely knows Frank Vanderwal as he works at a biotech company that Frank helped set up a few years back.

All these people perambulate through Forty Signs Of Rain; some of them meet, most of them learn a little, some learn a lot, but mostly they just get on with living. Robinson’s writing infuses us with a simple fascination and joy at their everyday existence and the familiar-but-different minutiae of their lives, whether they are raising toddlers, rating scientific funding proposals or practicing science.

All of these stories and more run through the novel like eye-catching threads in a vast tapestry of humanity, such that the backdrop and message, of encroaching man-made climate change, is simply a single coarse stitch in that tapestry, albeit one that eventually does intersect all the others.

Forty Signs Of Rain is being pushed as a book about climate change, but despite the heavy weather in it it’s more a book about humanity’s place in the bigger world picture (for good or ill), and our stunning ability to resist change no matter how important and necessary it may be.

And speaking of which, we’re left in no doubt who the bad guys are in this story: it’s the president’s science adviser (‘a pompous ex-academic…hauled out the depths of a second-rate conservative think tank when the administration’s first science adviser had been sent packing for saying that global warming might be real.’ p.140) and an economic system beginning with ‘c’ (hint: it’s not communism). But there are no ‘evil’ people, only misguided and stupid ones, and thus (again, as in real life) there is no titanic Biblical struggle between Good and Evil that occupies our every waking moment, there is merely the business of living, in its largest and smallest details.

And there are no heroes in the traditional sense in Robinson’s books either, no Heinleinian supermen with all the answers, but only men and women, usually scientists, all doing their best to understand genuine, complex problems and find solutions for them. Doing, then, what people in the real world do every day. It’s this quality above all in Robinson’s books that I find so magical, his delight in the everyday – the everyday joy of discovery, of human company and of simply being.

The fact that at the end of Forty Signs Of Rain, despite it being in some ways quite a demoralising tale, I had a profound sense of hope for the world seems to me to speak volumes about Robinson’s worldview.

Forty Signs Of Rain’s relative shortness renders it far less intimidating and more accessible than, say, the Mars trilogy, and it is a very very highly recommended introduction to Kim Stanley Robinson’s work.