Book review of The Songbirds of Pain by Garry Kilworth

This review of The Songbirds of Pain by Garry Kilworth was written in 2002 for the website Infinity Plus. 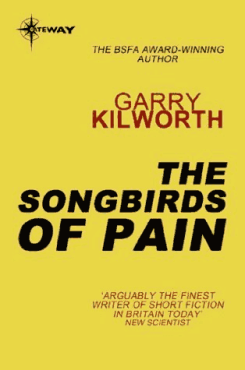 Garry Kilworth – I hope he won’t mind me saying this, it’s a compliment – has been writing sf and fantasy for a while. The Songbirds of Pain was his first collection of short stories, published in 1984, but some of the stories herein date back to the mid-seventies, when I was still wearing nappies.

Some things have changed a lot since then; punk and cyberpunk have both been and gone, and I don’t wear nappies any more. Science fiction, most of the good stuff anyway, is different; it has evolved, as it must. We’ve gone ecological, (more) political, nanotechnological,– even neo-space operatical now. A lot of the old guard have died: Asimov, van Vogt, Heinlein and Frederick Pohl to name but four.

So how does this rather anachronistic-looking, slim, bright yellow (the look was recently revived, for nostalgic reasons, by Gollancz) hardback stand up to the new kids on the block? Do they kick away its walking stick and leave it bruised, confused and considerably poorer in a dark alleyway somewhere?

On the front cover of The Songbirds of Pain a Mr J.G. Ballard is quoted as saying that ‘Sumi Dreams Of A Paper Frog’, one of the stories in this collection, is ‘the best short story I’ve read for many years’. If J.G. Ballard, of all people, thinks you’ve got a hit on your hands then Ladbrokes will stop taking bets upon it, and rightly so, for The Songbirds of Pain is an exceptional collection of stories.

The weakest is probably the title tale, a story of a young woman’s strange plastic surgery to make her not merely beautiful but ‘breathtaking’, and the changes this wreaks upon her soul. ‘The Man Who Collected Bridges’ and ‘Almost Heaven’ each reminded me of Doris Lessing’s sf work in their sparse, straightforward narratives and barest nods in the direction of sf.

Similarly with ‘The Rose Bush’, a haunting tale of a dying love amidst a dying humanity, is first and foremost about people, the sf-nal aspects are strangely muted backdrops against which the strangeness of humans (let alone aliens) stands out all the more boldly. No matter how awful or peculiar the situations Kilworth’s characters find themselves in it is their human emotions, failings and actions that drive the stories to their understated conclusions.

For my money I have to agree with Mr Ballard – ‘Sumi Dreams Of A Paper Frog’ is an exceptional story. This carefully crafted, simmering six-page meditation upon the lot of the soldier is a remarkable addition to the sf genre or any genre for that matter, and a not dissimilar piece, ‘Oubliette’, about a man who thinks he’s a rat or a rat who thinks he’s a man, is also very fine, inventive and unsettling, if not quite in the same class.

Of the others, two stories utilise Kilworth’s knowledge of more exotic parts of the world: the bizarre premise of ‘Blind Windows’, that a new colour exists somewhere in the wilds of Cambodia, was a bit too outré for me, although the tale was well told, and ‘The Dissemblers’ began as a promising Borges-lite tale but sadly fell at the very final hurdle.

None of these stories is weakened by the intervening years; in fact, this collection just goes to show that good science fiction and fantasy doesn’t rely on the latest technological tricks and hackneyed plots but on people.