The Eye Of The Tyger by Paul McAuley

These three reviews were written in 2002 for the British Science Fiction Association’s magazine, Vector. 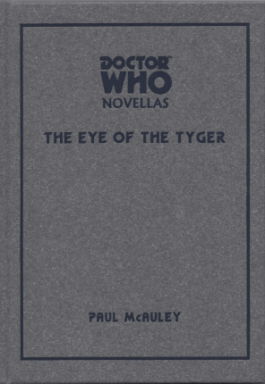 These new Telos (see http://www.telos.co.uk) Dr Who deluxe editions all look absolutely gorgeous – although The Eye Of The Tyger gets a special mention for looking like it’s sleeved in worn steel – but these are books (novellas, technically) and though having a cool cover never hurts it should be what’s on the inside that counts.

I loved Dr Who as a child and stayed with the series from Tom Baker through Peter Davidson to Colin Baker, enjoying all the incarnations. However, when the series took its hiatus we kind of grew apart, and when Sylvester McCoy took over I had found another lover.

Watching those old episodes again now much of the lustre has obviously faded but the core idea remains one of genius; the Protean hero living in a world that despite some sf trappings is actually a gloriously rich fantasy, a tapestry of disparate ideas stitched together with some very strong thread.

Reading these three books reminded me of the wonderful impossibility of forming a single coherent timeline from the Doctor’s adventures. Not only is there no single Doctor but there doesn’t seem to be a single universe that he inhabits either; instead he flits around a multiverse (I recommend reading the article at http://www.edge.org/3rd_culture/susskind03/susskind_index.html to better appreciate this), thus allowing for anything to happen. Part of the continued relevance and success of the Doctor is, I think, this fluidity of movement within multiversal reality.

Anyway, hark at me babbling on when all you want to know is are the books any good!

The good news is that all three of them are not bad at all. The Eye Of The Tyger has, as you might expect from the pen of Paul McAuley, generation starships, nanotechnological werewolves and black holes. His depiction of the eighth Doctor is of a calm and dignified man, very calm, clever and in control – instantly likeable. There is a rather savage change of scenery mid-story that jarred with me for a while until I remembered what (or should that be ‘Who’?) I was reading.

Tara Samm’s Frayed is very much a horror story that should instantly bring to mind the days when Dr Who was really scary. This isn’t a book you’d want to let a young child read because it’s deeply unpleasant – in a good way – and chockfull of blood and horror. Genetic experiments gone horribly awry, a base of stranded humans besieged by savage aliens on a distant world and a dark mystery at the heart of it all. Oh, yes. All this and the first Doctor, too, in an adventure set before An Unearthly Child. Tara Samms presents him as entirely unsympathetic, but all the more fascinating for that.

Companion Piece features the seventh Doctor and Cat (whom I confess to being entirely unfamiliar with) tangling with not the Spanish Inquisition but their big brothers in the Intergalactic Inquisition. I was somewhat surprised to find that I ‘got’ the Sylvester McCoy Doctor in this story; the way Perry and Tucker present him makes sense in this context and it’s possible to see some potential for the series with McCoy at the helm if it hadn’t been cancelled.

The story is, once again, an interesting one, touching upon religious issues in science fiction. Nothing that hasn’t been done elsewhere with more sophistication, but some interesting questions are at least asked of a resurgent Catholicism set loose in the wider universe.

The real test of these books for me was always going to be whether I could imagine them as being actual ‘proper’ adventures broadcast on TV – and I could. It was easy to visualise all three (right down to the slightly wonky special effects that would be used). The authors have obviously thought about the Who universe and how it works, they’ve noted what makes it different from any other sf format and have managed to reproduce this magic on the page.

If £25 for these deluxe editions seems to you a little steep for such relatively small pleasures then Telos have also released them in eminently more reasonable standard editions for just £10. Each book does contain a painted frontispiece too, although these do vary a little in quality. Chris Moore’s one for Frayed is truly excellent: his artwork is of near photo quality and adds significantly to the overall effect of the story. Jim Burns’ effort for The Eye Of The Tyger and Allan Bednar’s Companion Piece are not quite as necessary to the stories they illustrate but it’s still nice to have them there.

OK, so these books might not be quite right for the analytical lover of bleeding edge hard sf in your life, but they ought to briefly brighten a cloudy day for less rigorous readers with fond memories of the Doctor.